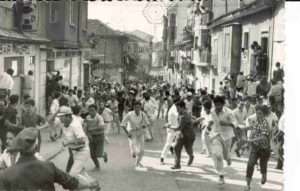 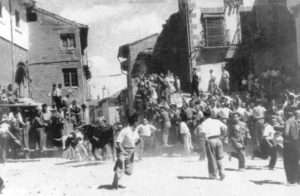 The CUÉLLAR Bull Runs are documented as the oldest in Spain.

The CUÉLLAR Bull Runs boast status as the oldest in Spain according to documents. This affirmation is not made lightly. Its origins hearken back to the early 13th century. In the 14th century, Queen Leonor, the wife of John I of Castile, princess of Aragon by birth, was lady of Cuéllar. The noblemen and taxpayers in the city complained to her, and in response to their complaints, she stated that running the bulls in Castilla had been a custom since time immemorial. Later on, Beltrán de la Cueva, I Duke of Alburquerque, ratified this ruling on all points. In the Historical Archive of Cuéllar, documents have been kept since 1405 that reference festivals with bulls. In addition to the Regiment Agreements, which in 1484 ordered payment of bulls to two different people, as of that year, there are constant references to bulls in these Agreements. Especially to pay for the festivals of Saint John and of Corpus, although bulls were also run for special events, such as the birth of some heir to the House of Alburquerque, or when the lords visited the City, as well as to celebrate the end of an epidemic.

In 1999, the 500th anniversary of the Cuéllar Run’s Regulating Ordinance was held. This is the first written regulation that has survived until our times and is the 17th law of ordinances given to the City of Cuéllar and its Land in 1499 by Francis Ferdinand of la Cueva, II Duke of Alburquerque.