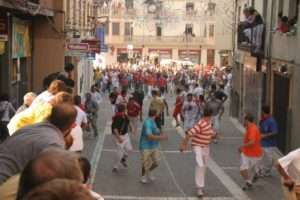 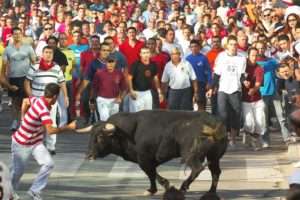 Runners are those who voluntarily and actively participate in the bull spectacle on foot, enjoying it through racing, prodding, or bullfighting, and must follow instructions given by Control Staff.

While the bulls and oxen go through the city’s streets, it is forbidden to use objects that could harm the animals, and any activity that would be considered cruel, degrading or undignified. In this regard, the instructions given by the bull run director, volunteer collaborators and other organisation staff must be followed.

It is strictly forbidden to turn around, or attempt to do so, toward any of the animals in the bull run, going in the opposite direction. The direction must always be toward the Bull Ring.

Art. 8.4.- It is forbidden for minors to actively participate in the bull run, along with people bearing symptoms of inebriation, under the influence of drugs or who are mentally unsound, and individuals who, due to their physical or mental condition, may run excessive danger, or whose behaviour may lead to hazardous situations.

This conduct shall be fined pursuant to stipulations in the Regulation.